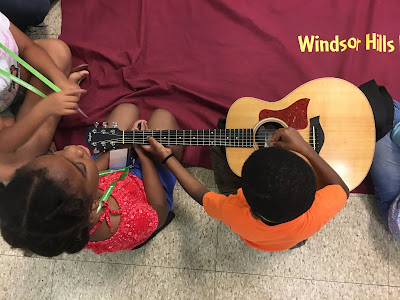 This summer I’m teaching two SummerReads residencies, where we have a few days to write a song together. I’ve focused on the theme of space travel in our books.


Parody of Beat It based on the book Moustronaut
Moustronaut was getting ready to go
To take a trip to Mars, he was ready though
But they didn't call his name, so he had to stow
So fly it, just fly it

5-4-3-2-1 blasted off to space
Take a trip to Mars, at the red place
The lander didn't work so Moustronaut took their place
Just fly it, Moustronaut saved the day!


Parody of Beat It - theme of space travel
I built a rocket to go to space
I left the earth to go to another place
I was flying so high, but it took a couple days
So leave it, just leave it

They told me you don't even wanna see Mars
You will never make it cuz it's too far
But I made it anyway and I flew to the stars
I made it, just made it

Posted by Flying Farmhouse at 7:10 AM